Staged Reading: The Strangest of All Rooms Creative

Company Director
David Lee
David Lee has served as the Artistic Director at Avenue Arts Marketplace and Theatre since the conception of the theatre company in 2017. He has had the pleasure of working with a diverse group of actors including youngsters as the Director of the young actors workshop each fall and spring. Some of his favorite shows with the the Junior class are “Annie JR”, “Willy Wonka JR”and “Shrek JR”. David also understands the importance in the development of new works and has formed a company of actors called “Underground” that preforms staged readings of new works. He invites you to check out the season of new works at AvenueArts.org. David is a Canton, Ohio native and attended Malone University where he was trained in the Michael Chekhov Technique of acting and revived and B.A. in Communication, Visual and Preforming Arts.
Company Manager
Emily HIsey
Emily Hisey has loved theatre since she was chosen to play the coveted role of Twinkle the Christmas Angel at age nine - she’s been escaping reality ever since. Past stage credits include Jane Eyre, Dancing at Lughnasa, Doubt, and A Year With Frog and Toad. Emily is grateful for the opportunity to collaborate with such talented and hardworking artists. “Enjoy the show and thank you for supporting live theatre!”
Company Assistant
Anna Richkowski
Stage Manager
Mark Dillard
Mark is 40 years old and currently works for the Social Security Administration. No stranger to the performing arts realm in Canton, Ohio, Mark has been previously seen in productions such as JESUS CHRIST SUPERSTAR (Pontius Pilate), GODSPELL (John The Baptist/Judas), THE LITTLE MERMAID (King Triton), and RAGTIME (Booker T. Washington). He would like to send out a “thank you” to his lovely wife, Racquel, and his kids, Bella and Donnie, for their continued support.
Talk-Back Facilitator
Zen Davis
Zen is currently a Doctoral Student at The University of Akron's School of Counseling and works as a Counselor and Marriage & Family Therapist at Phoenix Rising Behavioral Healthcare & Recovery. Past stage credits include RABBIT HOLE (Becca), WITH THEIR EYES (Annie Thoms), THE MIRACLE WORKER (Annie Sullivan), MARVIN'S ROOM (Bessie), and THE GLASS MENAGERIE (Laura Wingfield). Zen is excited to join Underground as a new company member this year along with her husband, Brad, and daughter, Anna. Thank you to David and Emily for the opportunity to be a part of live theatre! 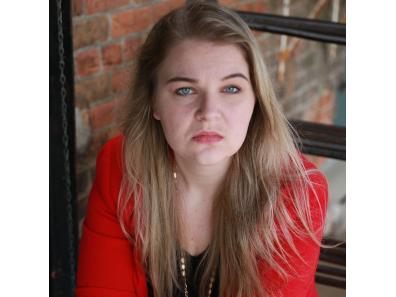 Emily Hageman, theatre and music educator and playwright, was born in California, raised in Colorado, and now lives in Iowa. Emily's one acts, short plays, and monologues have primarily been performed in Northwest Iowa, but have been produced throughout the country as well as internationally. Her one act "Back Cover" was selected as the 2018 Critic's Choice at the Iowa High School Speech Association Large Group Competition, and has been performed throughout the country in many high schools, middle schools, and professional theatres. Her one act "The Cages We Build" was selected as the 2019 Critic's Choice at the Iowa High School Speech Association Large Group Competition, making her school the first since 1982 to have two consecutive wins. Her ten-minute play "Ta-Da or Toodle-Oo" was selected for Heartland Theatre's Ten-Minute Play Festival, Spokane Stage Left's Playwrights Playground, and Stage It!; her ten-minute play "Present Tense" was selected for Theatre Lawrence's Short Play Festival, and her play "Everafter.com" was selected for the Stillwater Short Play Festival and the Red Eye 10s: International Playfestival. Her one-minute play "Day Six" was chosen for UK Gi60 Festival, her one act "Character Arc" was selected for Heartland Theatre's New Plays from the Heartland Festival, her ten minute play "Something Profound" was selected for Theatre Evolve's New Works Festival, her play "The Thought Doesn't Count" was selected for a reading at the Midwest Dramatist's Convention, and her play "The Orchid" was selected for A Light in Dark Places. Emily's theatrical pieces are being constantly workshopped by the magnificent high school and middle school actors at Siouxland Christian School.Emily's passion in life is writing plays for young (and young at heart) actors and actresses. She enjoys challenging them, making them think deeply, and tell stories with truth and beauty. She is a great giver of high-fives, an excellent avoider of hugs, and the loudest laugher that you will ever encounter.